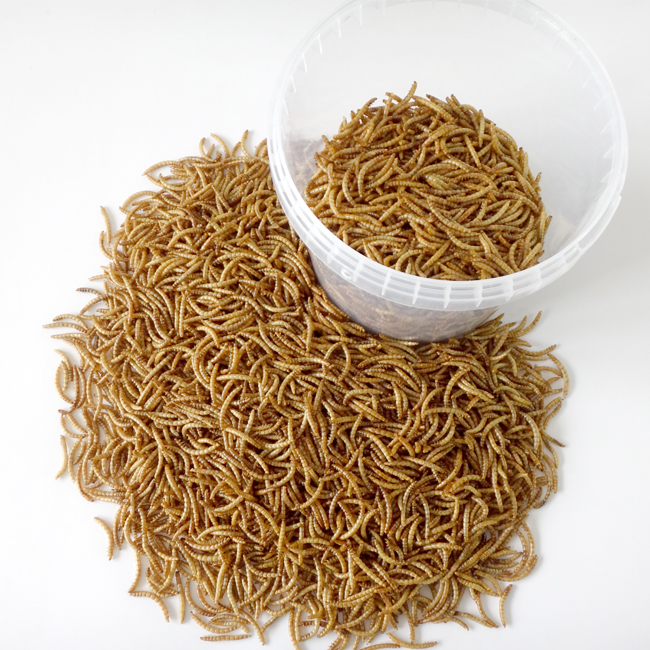 The traditional application of Tenebrio molitor is mainly used for special breeding. As a live feed, it is used to raise some special economic animals with high economic value such as toads, scorpions, turtles, ornamental fish, birds and frogs. It can also be used as a feed , which can improve the yield and quality of products.


Send email to us

The traditional application of Tenebrio molitor is mainly used for special breeding. As a live feed, it is used to raise some special economic animals with high economic value such as toads, scorpions, turtles, ornamental fish, birds and frogs. It can also be used as a feed , which can improve the yield and quality of products.

Tenebrio molitor is used as feed, and the feeding method is simple. Generally, the larvae can be fed directly. If the animals are small, you can put in Tenebrio larvae. However, several issues should be noted  :
① Feeding should choose live insects, not diseased insects and dead insects; appropriate cleaning should be done before feeding to prevent unsanitary factors from being brought into the farm [9] .

②Due attention should be paid to the feeding amount, especially for poultry and birds. Excessive feeding of insects will cause excessive protein and make animals suffer from dysentery and other diseases. When feeding aquatic animals, the amount of each dose should also be controlled as much as possible. If the dosage is too high, it will pollute the water body and cause animal diseases [9].

③ It is more economical to use mature larvae as feed, because the growth of the larvae is fast and low in the later stage, but the growth in the early stage is slow, the consumption of feed is large, and the cost is high.

edible value
Tenebrio molitor is rich in protein, vitamins, minerals and other nutrients. The protein content is much higher than that of conventional animal foods such as eggs, beef, and mutton. It is easy to digest and absorb. It is an excellent protein food. Tenebrio molitor has a good taste, unique flavor, and is easily accepted by consumers. It can be fried, baked, refined into protein powder and alcoholic drinks, processed into protein drinks with nut flavor and other forms of food.

we are a high-tech diversified enterprise that promotes biotechnology, sales of dried insects, pet food, feed processing and sales, and import and export of related products.

The company is located in Tangxian County, Baoding City, Hebei Province. The subsidiary Tang County Yimin Tenebrio molitor breeding plant was established in 2013 and covers an area of more than 17,000 square meters, of which the breeding workshop covers more than 6,000 square meters. Mainly through the breeding and sales of new varieties of tenebrio molitor , more than 1,000 tons of fresh products are produced annually, and this will promote the development of the surrounding tenebrio molitor breeding industry. weadopts modern production equipment and technology, and has a complete quality control and management system. Therefore, our products are favored and satisfied by customers.

We provide one-stop OEM/ODM services for customers all over the world. Our pet food have been exported to more than 30 countries
and regions, such as Japan,Korea, USA, Germany,France,England,Netherlands,Bulgaria,Russia,Singapore,Malaysia,Thailand,Vietnam,
Philippines and Australia, etc.

Write your message here and send it to us